What is it? What is our goal? In short and in long.

FloodCitiSense aims at developing an urban pluvial flood early warning service for, but also by citizens and city authorities.This service will reduce the vulnerability of urban areas and citizens to pluvial floods, which cause serious damage to the urban environment. Citizens are actively involved in the monitoring of rainfall and flooding, making use of low-cost sensors and web-based technologies. The early warning service will enable ‘citizens and cities’ to be better prepared and to better respond to urban pluvial floods. FloodCitiSense targets a co-creation of this innovative public service in an urban living lab context with all actors.

See below for a more comprehensive description of our Project.

occur when rainfall exceeds the capacity of the drainage system, which causes damages to the urban environment.

take part in the conceptualization of our web-based technologies and help collecting alternative data.

We combine high-resolution data with crowdsourced and smart-sensing data from our citizen observatories.

If operational, our model could help city authorities in taking appropriate decisions before and after flood events. 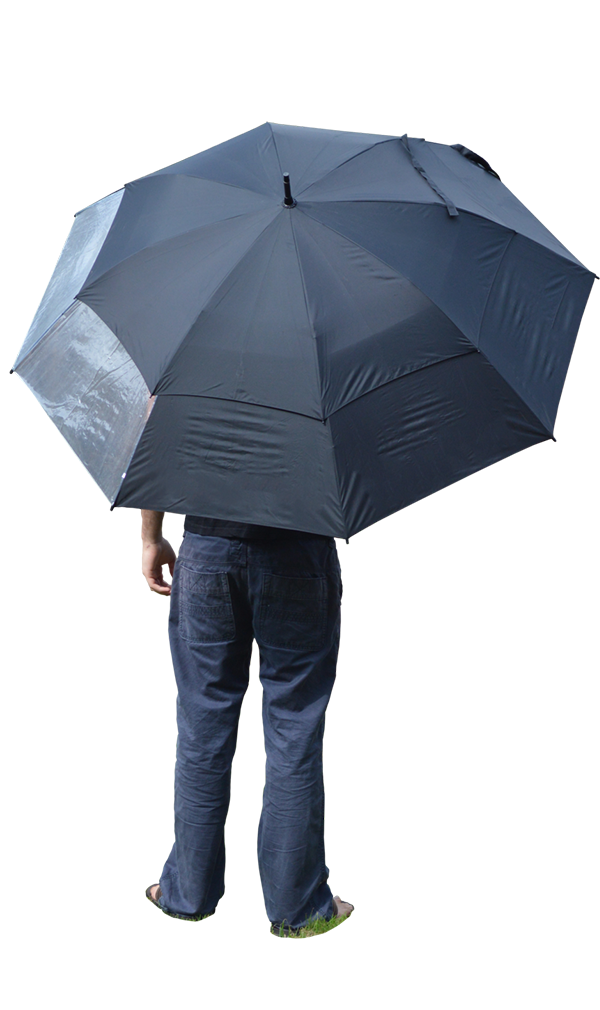 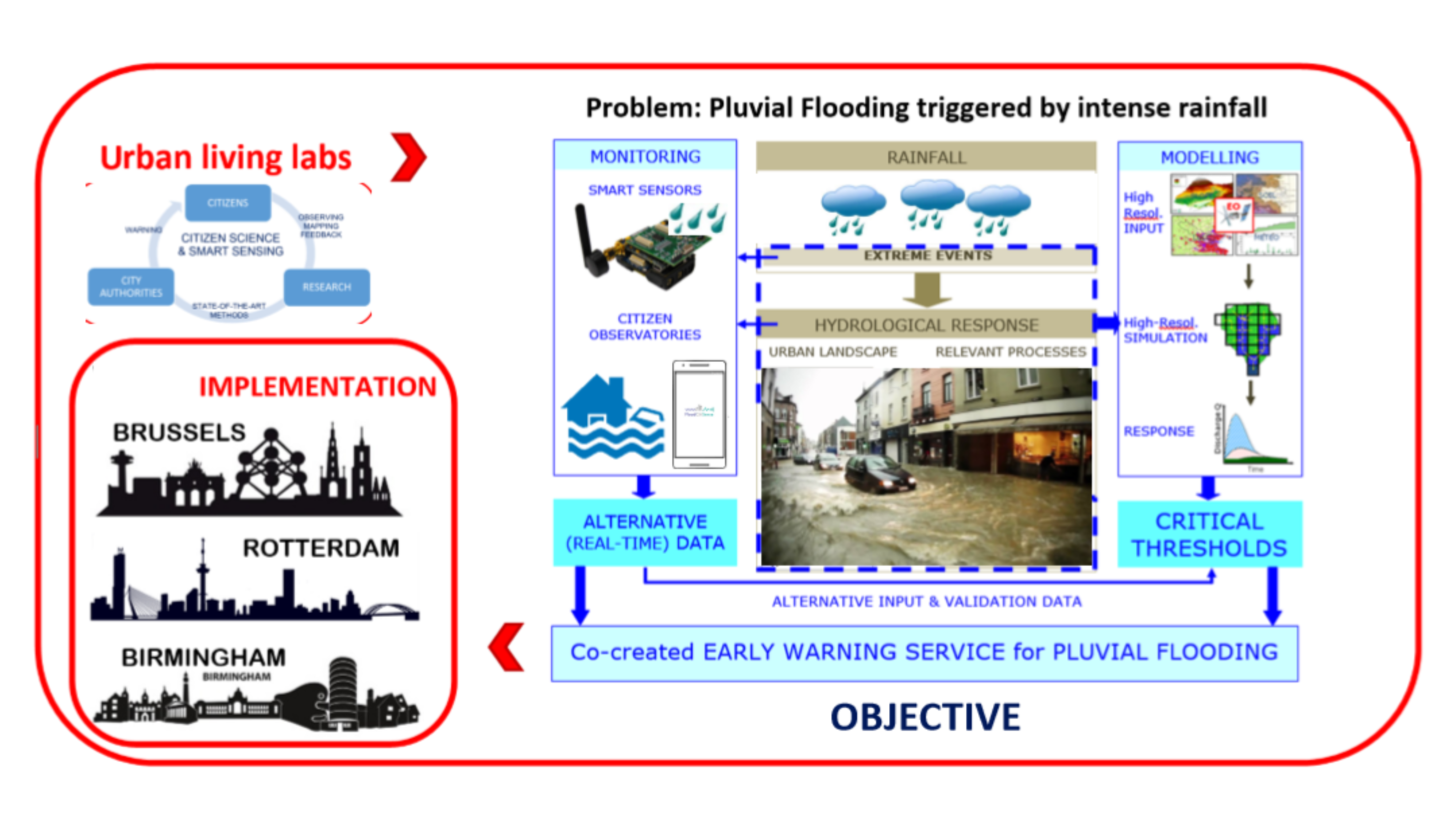 This project aims at developing an urban pluvial flood early warning service for, but also by citizens and city authorities, building upon the state-of-the-art knowledge, methodologies and smart technologies provided by research units and private companies. FloodCitiSense targets the co-creation of this innovative public service in an urban living lab context with all local actors. This service will reduce the vulnerability of urban areas and citizens to pluvial floods, which occur when heavy rainfall exceeds the capacity of the urban drainage system. Due to their fast onset and localized nature, they cause significant damage to the urban environment and are challenging to manage. Monitoring and management of peak events in cities is typically in the hands of local governmental agencies. Citizens most often just play a passive role as people negatively affected by the flooding, despite the fact that they are often the ‘first responders’ and should therefore be actively involved. The FloodCitiSense project aims at integrating crowdsourced hydrological data, collaboratively monitored by local stakeholders, including citizens, making use of low-cost sensors and web-based technologies, into a flood early warning system. This will enable ‘citizens and cities’ to be better prepared for and better respond to urban pluvial floods.

Analysis and requirements of the FloodCitiSense early warning service - WP1

In this work package, the research group imec-SMIT-VUB defined the conceptual framework for interdisciplinary collaboration and implementation among consortium partners and stakeholders through an outlined living lab methodology. For this, several co-creation workshops were organised in year 1 of the project with stakeholders of the living lab ecosystem of each pilot city. The workshops were organised with water managers, city councils, water boards, citizens living in flood prone areas etc. Several creative exercises, such as writing of user scenarios, were set up to gather wants and needs about the FloodCitisense web and mobile app. The outcome of this work package was a list of data and user requirements for the FloodCitiSense solution (see WP4).

For more information, you can consult the following deliverables:

The aim of WP2 is to collect high-resolution data, including rainfall and urban flooding, which can be used in WP3 for detecting and forecasting of critical thresholds and in WP4 for developing an early warning tool of urban flooding. The rainfall data are collected via low-cost smart sensors, which were developed in two phases. The first phase used a SD card to store and transmit data, namely, an offline mode, whereas the second phase used LoRa technology to transmit data in real time, namely, an online mode. The device can measure and send rainfall observations every five minutes. The flooding data are collected via the self-developed App – FloodCitiSense.

Through the use of fully operational hydrological and hydraulic models (urban drainage network models), as well as records of flooding kept by local authorities, each pilot has produced a catalogue of flood producing rainfall events. Relevant climatological data and more or less fine-scale flooding information are available for these same events.

By drawing upon these extensive data sets, each pilot is developing a data-driven model whose purpose is to provide short lead-time (up to a couple of hours) flood forecasting. This will typically take the form of probabilities of flooding on a grid which may correspond to that of the rainfall radar data.

The algorithms used depend upon the pilot. They include regression, analogue (nearest-neighbour) methods, and other data-driven techniques (e.g. artificial neural networks). In each case, the best possible use is to be made of the historical data sets by letting a supervised machine learning technique “learn” the type of rainfall events likely to lead to flooding and where. A methodology for integrating measurements from the rainfall sensors into this algorithm is also being developed.

The use of such a data-driven model is deemed unavoidable if quick forecasts are to be produced operationally for fast response by local authorities and emergency services: the full hydrological/hydraulic representation of the urban catchment is computationally too expensive

More details will be provided on the early warning system in the near future.

Testing phase and evaluation of the early warning service - WP5

The objective of this work package is to test and evaluate the FloodCitiSense solution. This includes the usability and usage experience of the tool, as well as its overall impact on the community and organisational level of the project. The evaluation framework consists of different measures, amongst others, user performance (effectiveness, efficiency and learnability of the tool) and user experience (usefulness, ease of use and satisfaction of the tool). Further, the outcomes on the scientific dimension, citizen scientist dimension and socio-ecological/economic dimension will be explored in year 2 and year 3 of the project.

For more information, you can consult the following deliverables:

Discover our mobile and web application for pluvial flooding! With the FloodCitiSense app, one can easily create their own rain or flood report and contribute to flood forecasting for research purposes and better urban management.
‍